Interstellar Ideas on the Green 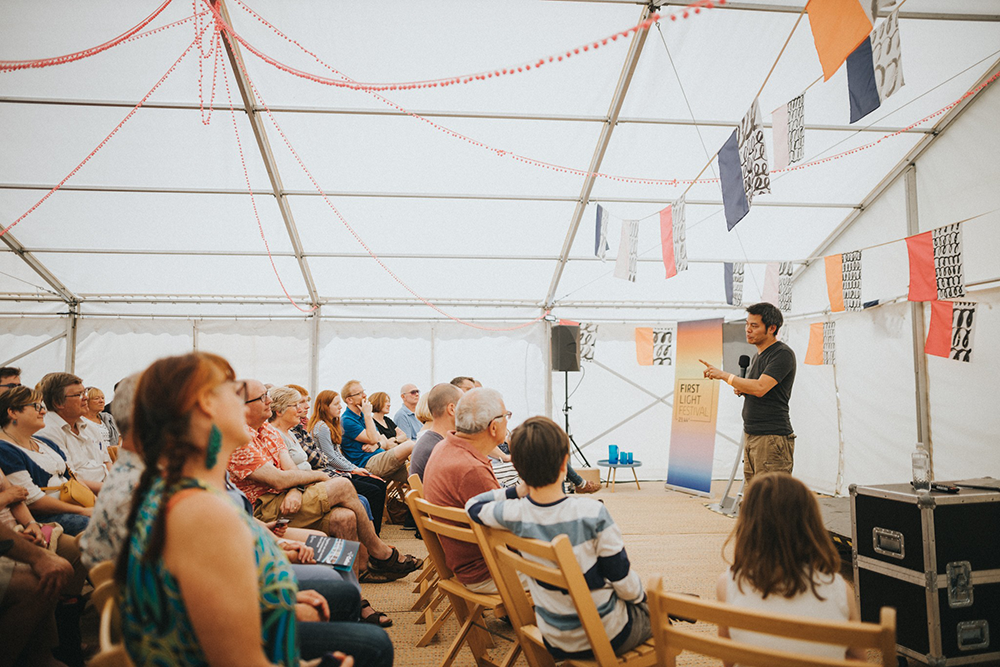 Join our partners Natural History Museum, University of Essex, Cefas and a host of writers throughout the Festival for engrossing talks and conversations around science, nature and our planet.

12:00 The Ocean in Motion: Movement in the ocean from big to small
This event will be BSL Interpreted

Join University of Essex experts for nuggets of stimulating bite-size science: with Dr Nick Aldred talking about Ocean Travellers: Exploring the hidden movements of life in the sea; Dr Anna Sturrock on From Ions to Ecosystems: Tracing Fish Movements and Health and Dr Michael Steinke on exploring the fascinating question of what is the smell of the sea, and how it makes our climate…

13:00 Oysters and Oil: Our Hidden Treasures

Join University of Essex’s Dr Tom Cameron talking about the history, recovery and restoration of lost features of coastal Britain and Prof Terry McGenity as he explores how the storms and beasts from the east uncovered oil from a 1970s oil spill off Lowestoft.

University of Essex’s Prof Alex Dumbrell will discuss biodiversity and landscapes and how science can help us have healthier nature, and Prof Tracy Lawson will talk about crops and the climate crisis and how plants can help reverse climate change.

15:00 Giant Squid: From Myth to Museum
This event will be BSL Interpreted

In legends and stories where they can take down ships and strike fear into the hearts of sailors, giant squid are thought of as mythical, monstrous beasts. Join Natural History Museum Curator Jon Ablett to hear about the reality of giant squid, what we know about them (and what we don’t know!), how scientists have long been fascinated by their discovery, and how an enormous 8.62m specimen called Archie ended up in the NHM collections…

16:00 120 Years of Marine Science in Lowestoft
This event will be BSL Interpreted

2022 marks an incredible 120 years of science in Lowestoft. In 1902, scientists worked to understand fish stocks in the North Sea. Today, Cefas’ mission is to understand how to keep seas and oceans healthy and productive in the UK and across the world.  Listen to Cefas’s marine scientists talk about life under water, including fisheries through the ages, marine protection around the globe and the challenge of climate change to net zero.

17:00 Shark Tales of the Past and Present

Sharks have swum in our oceans for hundreds of millions of years, surviving through huge changes in Earth’s climate and catastrophic mass extinctions. Join NHM curator Emma Bernard to see some of the beautiful fossils that tell their story, from giant Megalodon teeth to entire amazingly preserved specimens. Learn how ancient sharks adapted and survived, and what lessons we can learn from them about the future of our changing planet.

Join us for the launch of ‘Sea Sagas from the North’ the epic new book from award winning writer Jules Pretty.  Sea Sagas of the North interweaves prose chapters and alliterative sagas. Each chapter tells of travels across shores, seas and islands. Each saga tells of tales and times from across the ages. This is the territory of sagas, the Norse and Anglo[1]Saxon gods of old, the mythic era of Viking expansion by clinkered longship. It was when dragons protected people by hiding gold and silver hoards. These crossing tales and sagas begin at Iceland, take in the Lofoten Isles, travel to Sjælland in Denmark and the eastern shore of England, to the north lands of deepwater ports and holy shores of Lindisfarne, and then to isles of Shetland, St Kilda, and the Faroes, completing the circle back at Iceland’s fire and ice. The book concludes with the saga of the Drowning of Doggerland, how the once dry steppe was flooded by the warming seas, making the people of the plains into refugees. These are times when new stories might be needed, as the growing global crises wash at shores.

Drawing on his recently published book ‘Passions for Birds’ Sean Nixon talks about how our contemporary passion for watching birds has its roots in developments in popular ornithology in the first decades of the 20th century and about Desmond Nethersole Thompson, a figure not much read today, but who was a pioneer of the new birdwatching from the 1930s to the 1980s.

Join University of Essex experts for nuggets of stimulating bite-size science with Dr Dave Clark talking about the past and present of climate change through fossils and Prof Jules Pretty on 30 for 30 and the low carbon good life: how to cut our carbon footprints by 2030 and increase happiness. Martin Goodman is a writer, publisher and emeritus professor of creative writing at the University of Hull, who lives in Lowestoft. Each day starts with a view across South Beach to the North Sea, in a home he shares with his husband James Thornton, Founder and President of the not-for-profit environmental law firm ClientEarth.  In this talk Martin will discuss the award-winning book he and James wrote together about eco-lawyers who fight winning battles to protect the planet, Client Earth and new material on saving the seas that appears in its new Spanish edition as well as reading from Waymarks, James’s new poetry collection that features Lowestoft and James’s work to save birdsong.

10:00 Susan Oliver – Mermaids, sea-monsters and basking sharks: ecologies and imagination
Unfortunately due to illness, this talk has been Cancelled

Fresh from sitting her GCSEs, teenage climate activist Hattie Phillips joins us to talk about her role as a World Wildlife Fund Youth Ambassador, being part of COP26, what it is like to work alongside national and global organisations to raise the profile of climate change and how young people can and must be a driving force for decision making in fighting climate change.

Art Space on the Beach Workshops

A series of interactive, inclusive arts and craft workshops for all ages, running as part of Suffolk Libraries’ Art Space project.